I built a home server earlier this year to serve as a NAS and home media center. I’m trying to make a more concerted effort to take control over my own data and rely less on cloud services.

I chose Unraid as the underlying operating system. If you’re building a home server, I really recommend checking it out. Out of the options I tried, Unraid was by far the easiest to get up and running with.

The entire purpose behind building my home server was so I could take control over my data and rely less on cloud services. But this presents a problem: if I wanted to access my data from outside my home network, then I had to open up access to the server from the wider internet.

This isn’t a problem per-se, but I was really not into the idea of having the server open to the internet. What if there was a 0-day with Unraid or an app that I was using? I’m planning on putting a lot of data on this server, some of which is going to be highly personal, and I really really don’t want to have to worry about security issues that might lead to data leaks.

There are a number of ways you could solve this problem. One of the more common ways is to use a VPN to restrict access to the server. But I thought that would be clunky. Imagine I wanted to hop on to my Paperless site to fetch a document on my phone – how annoying would it be to have to connect to a VPN first.

Putting together a plan

The first thing on the list is domain mapping. I want a certain hostname to map directly to a running service on Unraid. For example, paperless.example.com needs to connect to Paperless which is running on port 8555 in a docker container.

I run all of my services as docker containers, and one of the easiest ways to get this all set up is to run a reverse proxy with Traefik: Connection -> Traefik -> Docker -> Backend App.

Goals 2-4 are really all a variation on the same theme – access control. For this I chose to use Cloudflare Access along with Cloudflare Argo Tunnel.

(Worth saying that the single vulnerability point here is Cloudflare. We are placing a lot of trust in Cloudflare’s systems being secure.)

At the time of this writing, Cloudflare Access is free for up to 5 user accounts, and then is $5/user/month after that.

Setup: Your domain with Cloudflare

Once that’s done, you need to go and configure Cloudflare Access. Click the “Access” icon and enable Cloudflare Access on your account. You can configure any kind of login methods, but I actually just keep the default “One-time Pin” method which sends you a code via email that you have to enter.

Create initial access policies for these three domains that we are going to set up now:

Here’s an example policy that allows based on an email address: 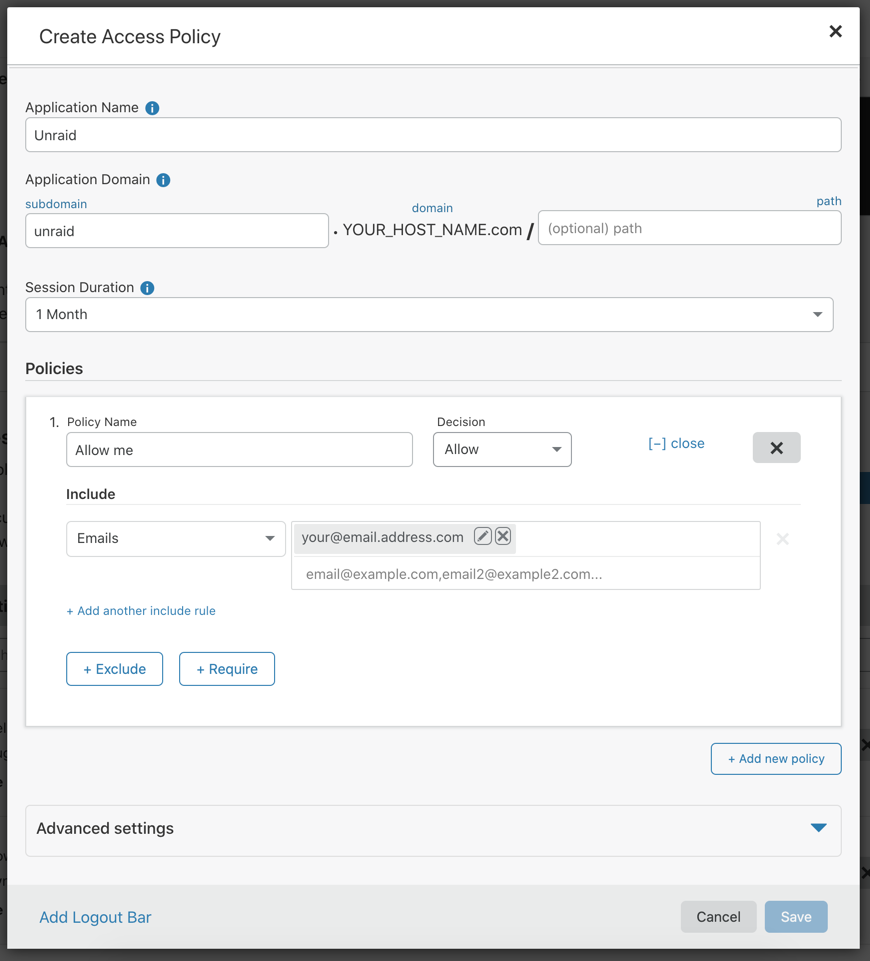 Next, we should set up Argo Tunnel. To do this you will need to SSH into your Unraid box.

Save files and binaries

There are two binaries we need to install on Unraid:

I’ve taken the liberty of creating a tarball of everything you need here: https://nadeau.io/post-files/unraid-cloudflare/custom.tgz

You need to install these files to /boot/config/custom.

So here’s an example SSH session:

Which will extract to:

Modify the hostnames in config

You need to edit the supervisord.conf file to change the hostnames. In the config, change YOUR_HOST_NAME.com to your real domain name.

There are two tunnels we’re setting up with two different host names:

When done, press Ctrl+O to write the file, followed by Ctrl+X to exit the nano editor.

Initiate the domain with Cloudflare

After you finish, you should see something like this in your terminal:

You’ll see a bunch of output but after a few seconds, you should be able to open a SSH connection through ssh.YOUR_HOST_NAME.com (e.g. open another terminal window and try it out). You should have already created a policy for the ssh sub-domain in a previous step; so when you try to SSH through this host now, you should have to log-in via the Cloudflare Access web UI before the connection is allowed.

Now you need to edit /boot/config/go which is a Bash script that Unraid executes automatically whenever the server boots up. You’ll need to add a few lines to this script to make sure supervisord runs at boot.

And then at the bottom of the file add these lines:

When done, press Ctrl+O to write the file, followed by Ctrl+X to exit the nano editor.

Reboot your Unraid server now so the tunnel starts. Test out the SSH tunnel again just to make sure it’s running.

Go ahead and install the Traefik community app.

I suggest you change the repository value to “traefik:1.7.26”. When I installed this app, it was defaulted to “traefik:latest” which ended up breaking my install a couple days later when a major new version was released with breaking changes.

Here are the options I suggest you set. You’ll note that I’ve removed some of the default options by clicking the “Remove” button.

At this point you should be able to load https://unraid.YOUR_HOST_NAME.com/ in your browser to load the Unraid web UI.

For every docker app you want to expose, you need to add labels with the following keys:

So to do this, you go into a docker app in Unraid, and click “Add another Path, Port, Variable, Label or Device”.

For example, I have Plex running on my box that looks like this:

Configure DNS for each app

Back in Cloudflare, go to the DNS tab on your domain. If the Argo Tunnel is running (it should be by now, if you’ve rebooted your server), you’ll see a special record for the unraid subdomain:

For each app you configured in the previous step, we need to create a CNAME record to this unraid name. For example, if you have a “plex” app and want “plex.YOUR_HOST_NAME.com” and you prepared the labels on the docker container, you’d now add a new CNAME record for that:

It’s important you add a policy now, otherwise the app will be world-accessible.

If you want the Traefik dashboard to work, you should create a CNAME for traefik.YOUR_HOST_NAME.com (and an accompanying policy) now. It’s not totally necessary, but it can be useful to see the status and health of the services running. 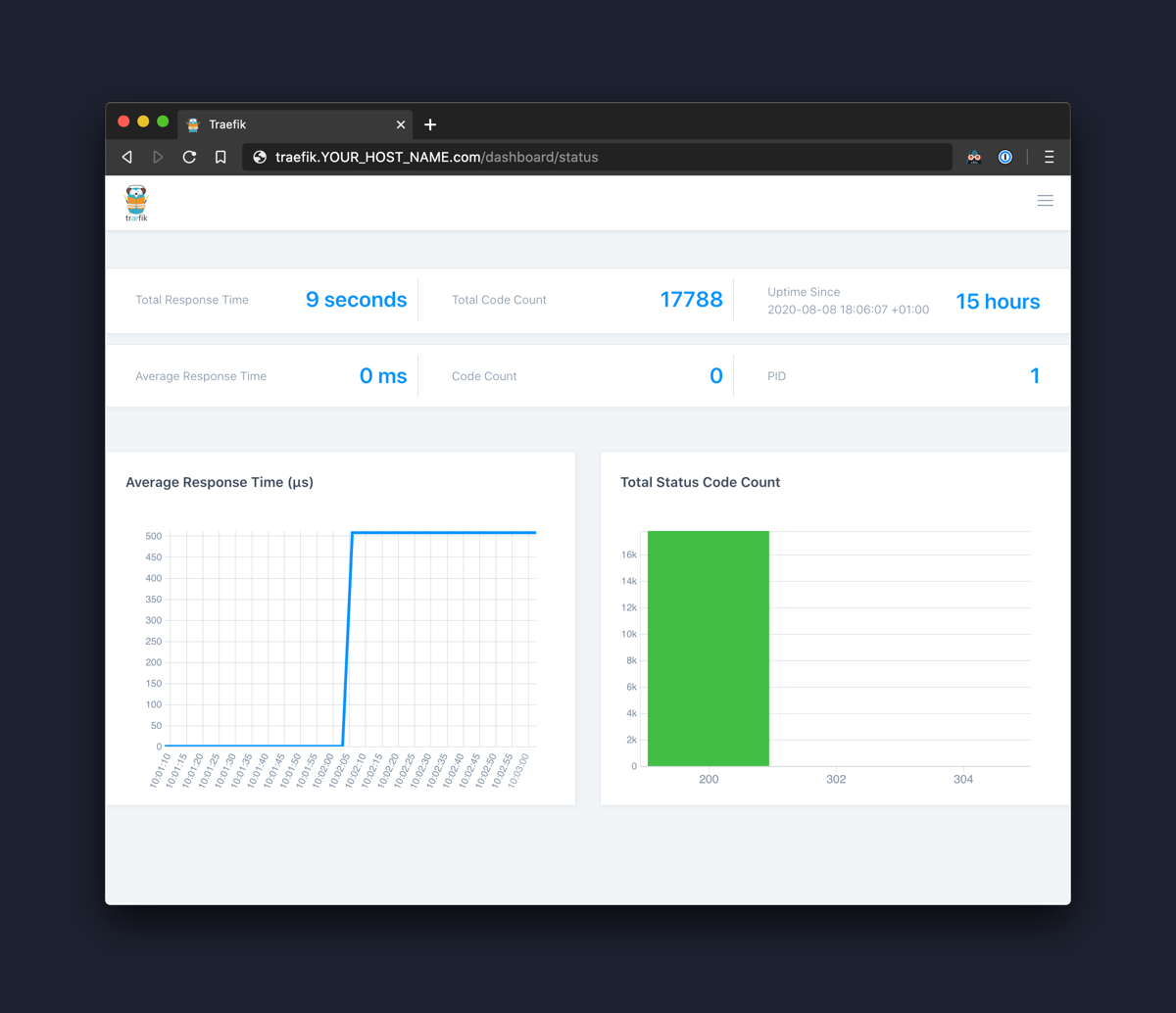 At this point you should have:

If it’s all working as it should, you should be able to go to https://yourapp.YOUR_HOST_NAME.com in your browser, and use the app.

Setup: Use friendly names on the local network

So this is all great when we’re away from home. But when we are home, we don’t want to proxy all traffic through Cloudflare because it’s going to introduce unecessary internet traffic. And for me at least, I didn’t want to enforce the same level of access control when using these apps from home.

You can obviously just continue to use the services via their IP/port combos like you might usually, but now that we have Traefik installed, it’s simple to add a secondary hostname so we can get friendly names we can use at home.

Note your private IP for the unraid server

You need to note down the private IP address of the unraid server within your home network. For example, mine is 10.0.0.24.

You should configure your router to always assign this IP address to the Unraid server. How you do this will depend on your router, but it’s usually under DCHP settings.

Back in Cloudflare, go to the DNS tab once more, and add two new A records:

Both of these records should point to the private IP address of your unraid server (e.g. mine is 10.0.0.24).

Go back to each docker app you added labels for. Remember the traefik.frontend.rule with the Host: value? This can actually take a comma-separated list of rules. So what we can do is add a second host, one for the local domain.

This means Traefik will know how to respond to both of those host names.

The main host name has DNS that points to Cloudflare and gets processed by Cloudflare (with Access and through the tunnel); then this new local host name has DNS that is your private IP address that will only work from within your home network. Anyone else who tries the local hostname won’t be on your network and so their requests won’t go anywhere.

The major limitation to this method is that it only works for HTTP(S) traffic from a browser, or for SSH. That means other protocols won’t work, and any app that has a dedicated mobile app most likely won’t handle the Cloudflare Access auth flow (e.g. the actual Plex app on iOS).

Solving some of these limitations in other ways is the subject of another blog post!